The sights, sounds, and scenes of Mardi Gras are something that must be experienced at least once in life. It’s a holiday steeped in Creole and Catholic traditions synonymous with frolicking fun, masquerading and revelry. And now it is our honor to invite you to partake in one of the most sought-after experiences in New Orleans.

Fantesca will be hosting its own float within the Krewe of Mid-City parade on one of the most festive days of Mardi Gras. Thanks to past Krewe of Mid-City Royalty, Susan & Duane Hoff, Fantesca has been given a truly unbelievable opportunity to join the fifth oldest Krewe in New Orleans Mardi Gras.

Join Us at Our Events

Join their majesties King & Queen LXXXV of the Krewe of Mid-City for the must-see event of Mardi Gras. The royal court is presented in a performance that takes you through a fairytale experience during the times of kings and queens, bringing the Mardi Gras theme to life. The Krewe of Mid-City is one of the few krewes that still holds a traditional Supper Dance. This is an exciting opportunity to celebrate with each other and retain the social quality that Mardi Gras has meant for the South. Ladies are expected to wear long ball gowns and gloves covering their elbows, and gentlemen attire is equality exquisite in tuxedos or military dress uniforms.

Parades have been a major part of celebrating Mardi Gras and floats have played a significant role over the past century. As time has gone on, floats have taken on a life of their own with thousands of dollars poured into decorations and year-round work in ‘secret dens’ throughout the city. All this work amounts to one of the most spectacular parties of the year.

On the morning of the parade (Sunday, February 19, 2023) all float riders will gather at the Sheraton Hotel on Canal Street to pick up themed-costumes that will be worn on the float. More than 200 Krewe of Mid-City participants will raise a toast to the King & Queen and depart in shuttles to the official starting point of the parade. Already situated on the float will be a plethora of throws including themed shirts, frisbees, coveted Doubloons, and of course, more beads than you can imagine.

The Krewe of Mid-City will begin its 3-mile parade route at 11:45AM. After that, it’s time to throw! Tens of thousands of attendees crowd city streets in celebration to see the beauty of these floats and catch special throws. The float experience lasts roughly 2 hours and will conclude on Canal Street.

We hope you can join us for this once-in-a-lifetime experience!

Learn More About the Krewe of Mid-City 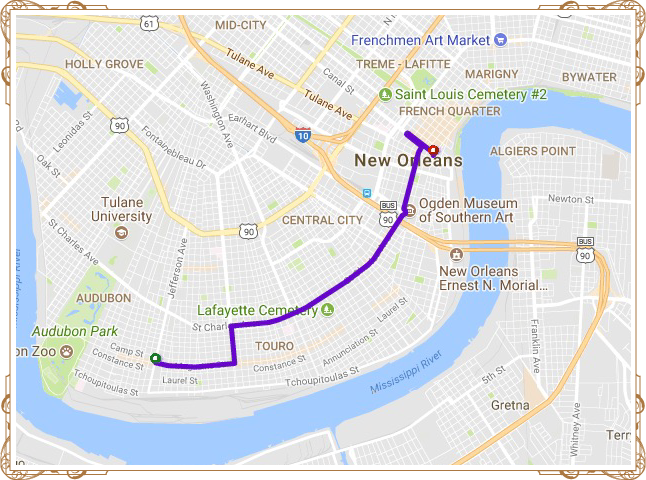 What is Included in This Experience?
Fantesca has been given exclusive access to participate with the Krewe of Mid-City. We have acquired access to the floats, costumes for the day of the parade, and all the throws you’ll need for the duration of the parade.

Where Should I Stay?
The Sheraton Hotel on Canal Street is the official meeting place for the Krewe of Mid-City to meet ahead of the parade. Riders will be given costumes and shuttled to the start of the parade. We recommend staying near Canal Street as parade routes make entering and exiting the area difficult. The Windsor Court Hotel is an exceptional stay located near the Sheraton.

Are There Other Events to Attend?
Yes, we will be hosting an intimate dinner featuring Fantesca Wines ahead of the parade. If you are interested in attending a dinner or joining the parade float, we invite you to submit your interest below.

For guests who do not ride on the KMC Floats, we welcome you to our a VIP Parade Viewing Luncheon.

If you have any questions about participating in Mardi Gras with Fantesca, please contact Mandi Ackerman at 707.968.9229 or email [email protected]